From GBFans.com
(Redirected from Peter Venkman)
Jump to navigation Jump to search 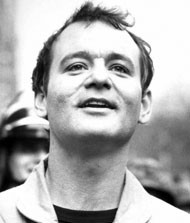 Venkman is an associate professor but his rumpled suit and the manic gleam in his eyes indicate an underlying instability in his nature. However, while a little short on academic credentials, Venkman is long on confidence, charm and salesmanship. - Original Script Description

Peter Venkman, whose PhDs in Parapsychology and Psychology are more for show than scientific procedure, was an associate professor at Columbia University in New York, along with his colleages Ray Stantz and Egon Spengler. When the three are evicted from campus, they decide to start a paranormal investigation and elimination service. After their first job at the Sedgewick Hotel and paranormal activity grows at an alarming rate, Venkman becomes romantically involved with Dana Barrett - whose body has been possessed by Zuul, the Gatekeeper for Gozer. 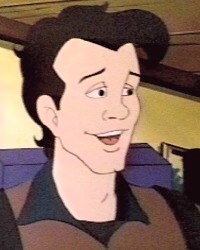 It means that if Darth Vader was willing to loan us the Death Star, we might stand a chance. Might.

Fame, fortune, and love are the driving goals of Peter Venkman's life, and he sees the Ghostbusters as a way of getting plenty of all three. While he's brighter than he's given credit for, he's also intellectually lazy and prefers letting Ray and Egon do all the thinking and Winston do the heavy lifting--unless he really has no choice, where he's as capable and selflessly heroic as his friends.

Peter is the son of a con-man, and while that element is apparent in Peter's personality, he also harbors a lot of resentment for the time his Dad was away, particularly at Christmas. Peter loves his father, but he's exasperated by him--especially as Venkman Senior is not above using his son in his schemes. As his mother was alone so much, Peter also has a soft spot for other elderly women, such as Mrs. Faversham.

(The fate of Peter's mother is unclear. Some episodes, and one issue of the Now comic, suggest she died when Peter was young. Other episodes make it sound like she was still alive.)

As his first encounter with Slimer involved terror and slime, Venkman was extremely opposed to the little green ghost being allowed to stay in Ghostbusters Central. He gripes constantly about the food bill Slimer runs up, and the green mess all around the firehouse. He eventually develops a softer spot for the ghost, but tries to hide it, especially at first. (One time, giving Slimer a midnight snack, he told him "And if you tell anyone about this, I'll deny it")

Peter is also constantly on the make, flirting with every woman that crosses the Ghostbusters' paths (His movie love interest, Dana Barrett, is never mentioned in the animated show; she is mentioned a few times in the Now and Marvel UK comics, however, and an RGB version of Dana appears in The Real Ghostbusters in Ghostbusters II by Now Comics)

As revealed in "Back In The Saddle", once the Ghostbusters go out of business Peter moves to LA and becomes a Hollywood agent. He also tries to get Brad Pitt to play him in Ghostbusters III.

Peter: Someone blows their nose and you want to keep it?

Peter: No, we're exterminators. Someone saw a cockroach up on twelve.

Peter: Why worry? Each one of us is carrying an unlicensed nuclear accelerator on his back.

Peter: …I make it a rule never to get involved with possessed people.

Peter: Let's show this prehistoric bitch how we do things downtown.

Peter: There were so many holes in first avenue, we didn't think anyone would notice.

Peter: Sometimes shit happens, somebody has to deal with it, and who you gonna call?!

Peter: I have all new cheap moves

Peter: Back off man...I'm a scientist!

Peter: Nobody steps on a church in my town!

Peter: Yes, it's true. This man has no dick.

Peter: Slow down, chew your food.

Peter: Did you ever wonder if she's naked under that toga?...She's French you know.

Peter: Hey, I'm a voter. Aren't you supposed to lie to me and kiss my butt?