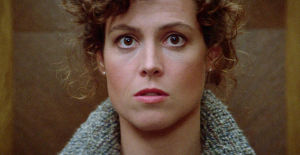 Dana Barrett is a musician who lives in an apartment across from Louis Tully in the Shandor building at 55 Central Park West. She first appears casually coming home with bags of groceries to discover supernatural activity inside her kitchen. As she unpacks her groceries she is surprised to see her eggs, having popped out of the carton, frying on her kitchen counter. Her shock turns to fright as she hears strange noises come from her refrigerator which she opens to find another dimension housing a strange portal, the Temple of Gozer, guarded by a mythical beast who growls out the word "Zuul" to the terrified Dana; she screams as she slams the door shut. Dana visits the Ghostbusters to tell them about her encounter, they question and examine her and Peter Venkman, having quickly become attracted to her, offers to check out her apartment. Once inside the apartment he unsuccessfully tries to both charm Dana and examine the apartment for supernatural activity. Dana quickly becomes annoyed with Peter and throws him out of her apartment. After taking on and solving other cases, the Ghostbusters discover more information pertaining to Dana's case which Peter offers to discuss with her over a date. On the night of the arranged date, Dana becomes trapped in her chair by demon arms ripping through and screams in terror as Zuul, the Terror Dog and Gatekeeper of Gozer she had seen in her refrigerator appears inside her kitchen. The chair, with Dana pinned to it, glides into the kitchen where Zuul possesses her.

When Peter arrives at the apartment for his date he is taken aback when Dana, under Zuul's control, answers the door wearing seductive clothing and heavy make-up. Zuul asks him if he is the Keymaster and quickly slams the door in his face when he replies negatively. Peter knocks on her door again and when the seemingly oblivious Zuul again asks if he's the Keymaster he says yes before quickly sneaking into the apartment. Zuul introduces herself as the Gatekeeper and tells Peter they must prepare for the coming of Gozer. He plays along but rebuffs Zuul as she seduces him aggressively. Peter persistently asks to speak with Dana which angers her to the point she announces, in a demonic voice, that "There is no Dana, only Zuul". Peter continues to ask to speak to Dana which ultimately leads an extremely frustrated and angry Zuul to begin growling horrendously like a Terror Dog while levitating above the bed. Peter stares speechlees, finally becoming scared when the floating Zuul unleashes a monstrous roar in his face. He sedates her with thorazine and calls Egon, who has been handed over custody of Louis Tully who has been similarly possessed by Vinz Clortho, Keymaster of Gozer. The two discuss Zuul and Vinz and decide they must be kept apart. Peter leaves Dana's apartment as the sedated Zuul lies asleep in bed. When Walter Peck arrives and shuts down the containment grid, Zuul awakes staring out at the supernatural phenomena surrounding the city from her living room windows and Louis/Vinz escapes in the ensuing chaos. Zuul roars out once again, this time with such force that the living room windows explode outwards. Vinz finds his way back to the Shandor building, where he notices the demolished living room wall from the street below. He arrives at Dana's apartment meets with Zuul with a passionate kiss before they walk up to the roof of the building through a mythical staircase behind what was once the kitchen door. It is insinuated that their union is consummated soon after as they are next shown lying on a stone table across the Temple of Gozer, Zuul appearing finally satiated and Vinz awaking with a contented grin and his belt buckle dangling broken and limp. Zuul and Vinz take their places in the opposite pedestals where the Terror Dogs had previously hatched and await the coming of Gozer. When the time comes Zuul and Vinz raise their arms to the sky and become struck with lightning which they redirect toward the massive Temple doors in order to open them. Once the doors grind completely open Zuul and Vinz lower their arms to the ground and get on all fours before transforming from Dana and Louis' human bodies into their native Terror Dog forms. The two demons roar at the Ghostbusters, who arrived just in time to witness the transformation, and then leap toward the Temple to take their places next to Gozer.

After the Ghostbusters defeat Gozer and the Stay Puft Marshmallow Man, Dana and Louis are reverted back to their former selves, and are freed from the charred remains of their dog forms.