From GBFans.com
(Redirected from Category:Ghostbusters: The Video Game)
Jump to navigation Jump to search 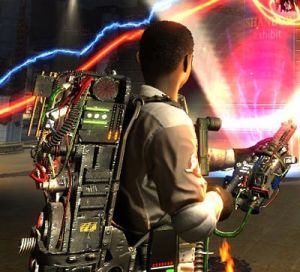 Dan Aykroyd and Harold Ramis assisted in writing the story and script.

Two years after the events of Ghostbusters 2, the Ghostbusters are still going strong. In fact, they are doing so well that they have decided to take on a Rookie/Experimental Equipment tester! Of course it just so happens that a historical exhibit of the Ivo Shandor has come to town and bringing some uninvited guests with it! 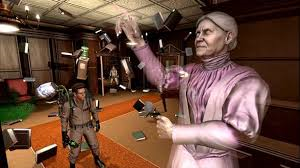 While the actual graphics and play style differ across different systems, in general the player is an un-named Rookie, also nicknamed Hoss, that gets to geek out with the latest and greatest Ghostbusting technologies. The game takes place from a 3rd person point of view, meaning the player sees their character the entire time.

Players go through the levels capturing or destroying ghosts through the use of various Ghostbusting equipment. Players can either maximize or minimize property damage and can either pay for or automatically earn equipment upgrades throughout the game.

Players can find hidden artifacts throughout the game, many of which are references to the films. They can also earn awards/achievements.

The PC version has no multiplayer or online gameplay.

As an Experimental Equipment tester, players get to utilize Proton Packs which are modified more and more throughout the game to add more features. The pack itself can overheat with too much activity and has to be vented to allow super-heated air to escape.

The PKE Meter and Ecto Goggles are integrated with each other, along with an interactive integrated Tobin's Spirit Guide.

The Ghost Trap can also be modified to add more features.

Throughout the game, players will find artifacts that are throwbacks to the original movies and even to Ghostbusters merchandise. These artifacts, including a painting of Vigo the Carpathian and the infamous Dancing Toaster, end up back in HQ for the player to explore.

There are also less obvious references to The Real Ghostbusters and even Extreme Ghostbusters if the player looks around carefully.