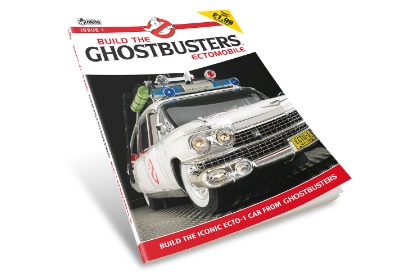 Back in July we reported growing concerns regarding collectable model company Eaglemoss Ltd, which at the time had ceased online communication with it's customers, and was in the process of appointing an administrator - putting the future of their "Build the Ghostbusters Ecto-1" model in doubt.

However today there is renewed hope that those customers who had been collecting the model may get the change to finish their Ecto-1 models in the near future. As revealed by Jason Fitzsimmons at Ghostbusters News, Premium & Collectibles Trading Co. has acquired a number of former Eaglemoss assets and licences, and amongst the brands Premium & Collectibles is looking to eventually resume is the Eaglemoss Ecto-1 model, complete with a web page with a notification link.

The fanhome website has detailed that collectors will get the opportunity to resume where they were up to when Eaglemoss filed for bankruptcy (rather than have to start the whole build from issue #1).

Additionally, Jason was able to learn through communication with Premium & Collectibles Trading Co. that potential customers won't be able to purchase specific back-issues, or purchase items in bulk. He was also able to learn that Premium & Collectibles Trading Co. will be offering the acquired licenses to Austria, Germany, the Netherlands, the United Kingdom, and the United States.
zeta otaku liked this
Feeling overwhelmed by the Covid-19 pandemic? Please visit The Support Thread.