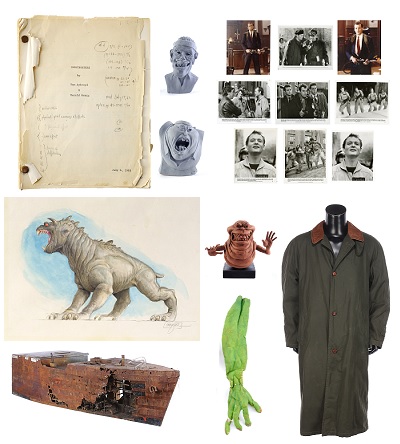 November marks the next Entertainment Memorabilia Live Auction by Propstore, and has now become a tradition, the event features props from Ghostbusters and Ghostbusters II, along with some promotional items.

Two of the stand-out pieces come from the 1989 movie, the bow section of the R.M.S. Titanic ghost ship, which was previously auctioned back in October 2021, and Bill Murray's screen-used Venkman coat, which was seen frequently through the film.


Please view the topic for detailed listing of the auction lots. The auction will take place between November 3rd and November 6th.
Feeling overwhelmed by the Covid-19 pandemic? Please visit The Support Thread.

By Kingpin -  October 7th, 2022, 3:00 pm
-  October 7th, 2022, 3:00 pm#4973184
161. Screen-matched Titanic Model Miniature GHOSTBUSTERS II (1989)
A screen-matched model miniature of the R.M.S. Titanic from Ivan Reitman's supernatural comedy sequel Ghostbusters II. The Titanic and its ghostly passengers appeared at the New York docks after the evil slime under the streets of the city began to cause widespread chaos. The model matches the one seen on screen, identified by the holes and markings toward the front.

Built for the production by the artists at Industrial Light & Magic, the miniature is of the bow section of the ship and is predominantly resin sheet mounted over a wooden frame, with carved biscuit foam inside for shape and stability. The ship is intentionally distressed to look like it has been at the bottom of the Atlantic for decades, with a large gaping hole on the right side.

There are a couple of small lights and some clear perspex rods on the deck through which light would have emanated, giving a ghostly glow, although these are no longer functional.

(Note: the photos of the Titanic miniature are identical to those of the 2014 listing.

162. Peter Venkman's (Bill Murray) Coat GHOSTBUSTERS II (1989)
This lot will be auctioned on Thursday, November 3rd. The auction will begin at 3:00PM GMT and lots are sold sequentially via live auctioneer; tune in to the live streaming broadcast on auction day to follow the pace. Note other lots in the auction may close on Friday, November 4th; Saturday, November 5th; or Sunday, November 6th.

The jacket has a wool lining and four buttons down its front. There is some minor staining on the front and on the left cuff.
Estimate: £4,000 - £6,000

This brass brad-bound script also features extensive annotations printed in the margins, some of which note the type of special effects needed and the degree of difficulty regarding those effects. The cover also presents a shooting schedule by grouped pages and dates. The script exhibits tearing, loose pages, and discolouration from production and age. Dimensions: 28 cm x 21.75 cm x 2.5 cm (11" x 8.5" x 1")
Estimate: £2,500 - £3,500

951. Ghostbusters Set of Nine Promotional Stills GHOSTBUSTERS (1984)
This lot will be auctioned on Saturday, November 5th. The auction will begin at 3:00PM GMT and lots are sold sequentially via live auctioneer; tune in to the live streaming broadcast on auction day to follow the pace. Note other lots in the auction may close on Thursday, November 3rd; Friday, November 4th; or Sunday, November 6th.

Nine stills from the promotion of Ivan Reitman's sci-fi comedy Ghostbusters. Columbia Pictures distributed photos to the media as part of its press kits.

This set consists of seven glossy stills of the Ghostbusters and Reitman printed in black-and-white on photo stock, as well as two colour-printed glossy photos of Peter (Bill Murray) in the courtroom scene. Several photos are numbered in the bottom right corners, and the set exhibits minor staining and creasing. Dimensions (each): 25.5 cm x 20.5 cm (10" x 8")
Estimate: £600 - $800

This concept artwork is rendered in mixed media on paper and signed in the bottom right corner by Enriquez. Also included is a loose grey matte board frame. The artwork exhibits some stains in the margins and a folded bottom left corner from handling. Dimensions: 35.75 cm x 33 cm (14" x 13")

953. Slimer's Right Hand and Skin GHOSTBUSTERS II (1989)
This lot will be auctioned on Saturday, November 5th. The auction will begin at 3:00PM GMT and lots are sold sequentially via live auctioneer; tune in to the live streaming broadcast on auction day to follow the pace. Note other lots in the auction may close on Thursday, November 3rd; Friday, November 4th; or Sunday, November 6th.

Slimer's right hand and skin from Ivan Reitman's supernatural comedy sequel Ghostbusters II. The glutinous ghost known as both Onionhead and Slimer appeared throughout the film.

Either it never sells or it sells ALOT. Or there was more than 1 made.

The Enriquez Terror Dog art is really, realllllllly cool. The maquettes are great examples, as well. I've already scratched my itch on those, or I would consider bidding. That script, though.

Kingpin wrote: ↑October 8th, 2022, 4:20 am What I'd like to know is what condition it's in compared to 2014, as there was someone who appeared to be selling-off broken off chips of it online a little while back.

I'm with ya on that one buddy. The "seller" still sells them. He has sold dozens. If its in fact the same model then why buy it to only tear parts off and resell your "scrap." I was just telling my girlfriend that I HATE this boom in prop displays that contain a piece of a prop in it. Some props or production items are fine to do it with. For example something like Walter Whites "Sky Blue" from Breaking Bad. A tone of it was made and it's a expensive buy. If you want to piece out some so other people have a chance at owning some? Great. With other things, it destroys the artistic value of the piece. I cringed at a display with a fingernail sized cut of a original 93' Jurassic Park map in it. Destroying something "iconic" is just gut wrenching.
I LOVE THIS TOWN!!!

I meant how it randomly turns into the Ecto 2 ou[…]

one in front of the gunbox that that's usually m[…]

We're bringing you the latest updates to the GBFan[…]