By GBfan77 -  December 11th, 2021, 9:59 am
-  December 11th, 2021, 9:59 am#4963272
Bought a Hasbro Ghostbusters Proton Blaster M.O.D. toy a while ago to replace the Spirit Halloween Pack wand. Scale wise it looks better. Anyway I pretty much noticed immediately that I would have to make a few changes. For one, once the thing is activated there's no way to shut it off. You just have to let it run until it shuts itself off. Also noticed two small switches at the tip of the wand. Depending on what accessory you chose to snap on you will get a different sound effect. I still want to use these features but not the fittings.

So I added a kill switch, re routed the two switches and activation button so they are now in the gun box. I was actually surprised as to how easy it was to do.

The rest of the customization will have to wait until spring. I plan to repaint it, add a vent light and replace the front hand grip so it resembles the Spengler wand and add the proper cables. Not sure about the light bar yet as I don't know if there's enough space inside.

If someone is wondering why I didn't just use a Spengler wand I consider that a collector's item and I don't want to damage the one I have. 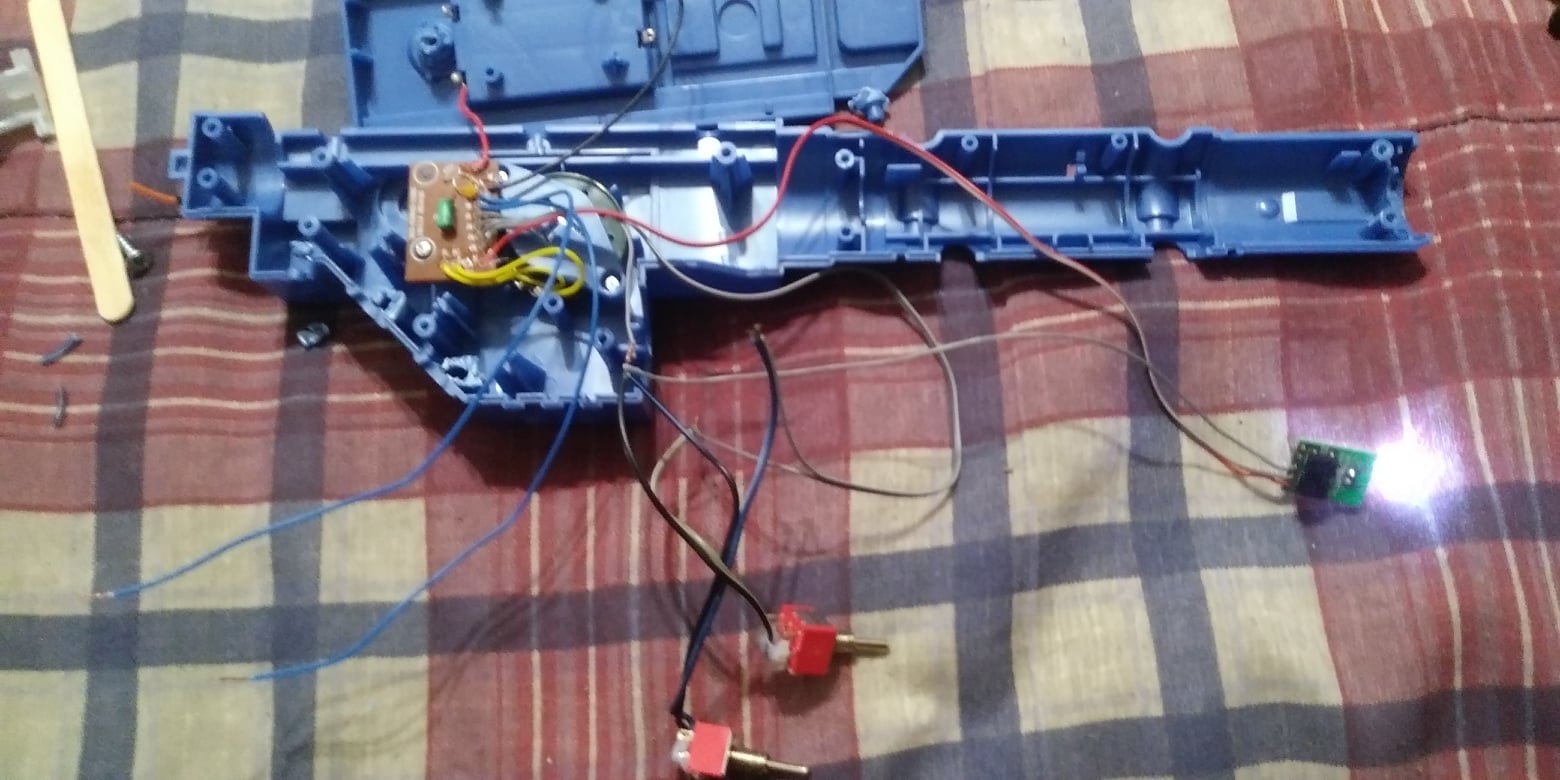 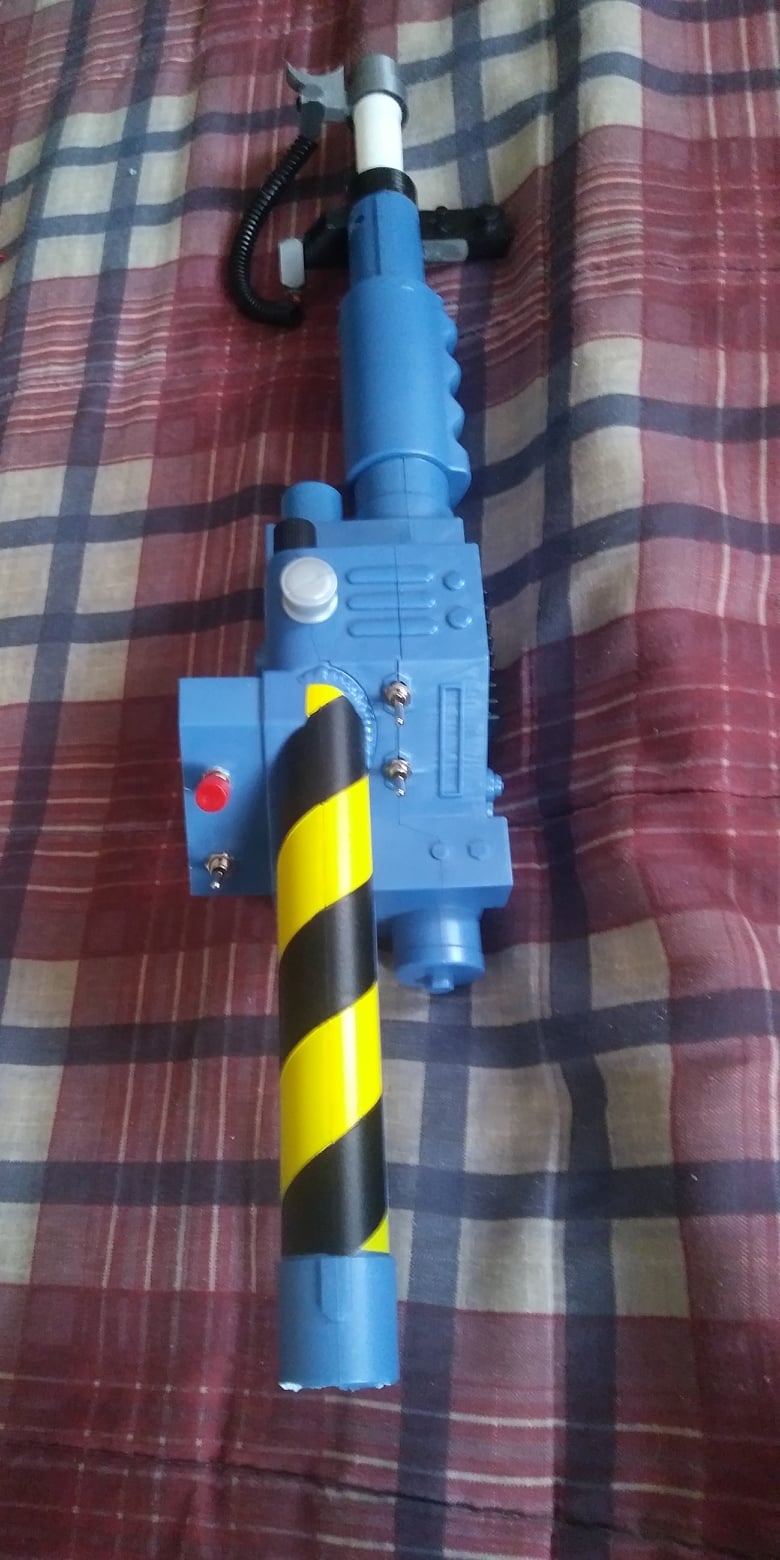 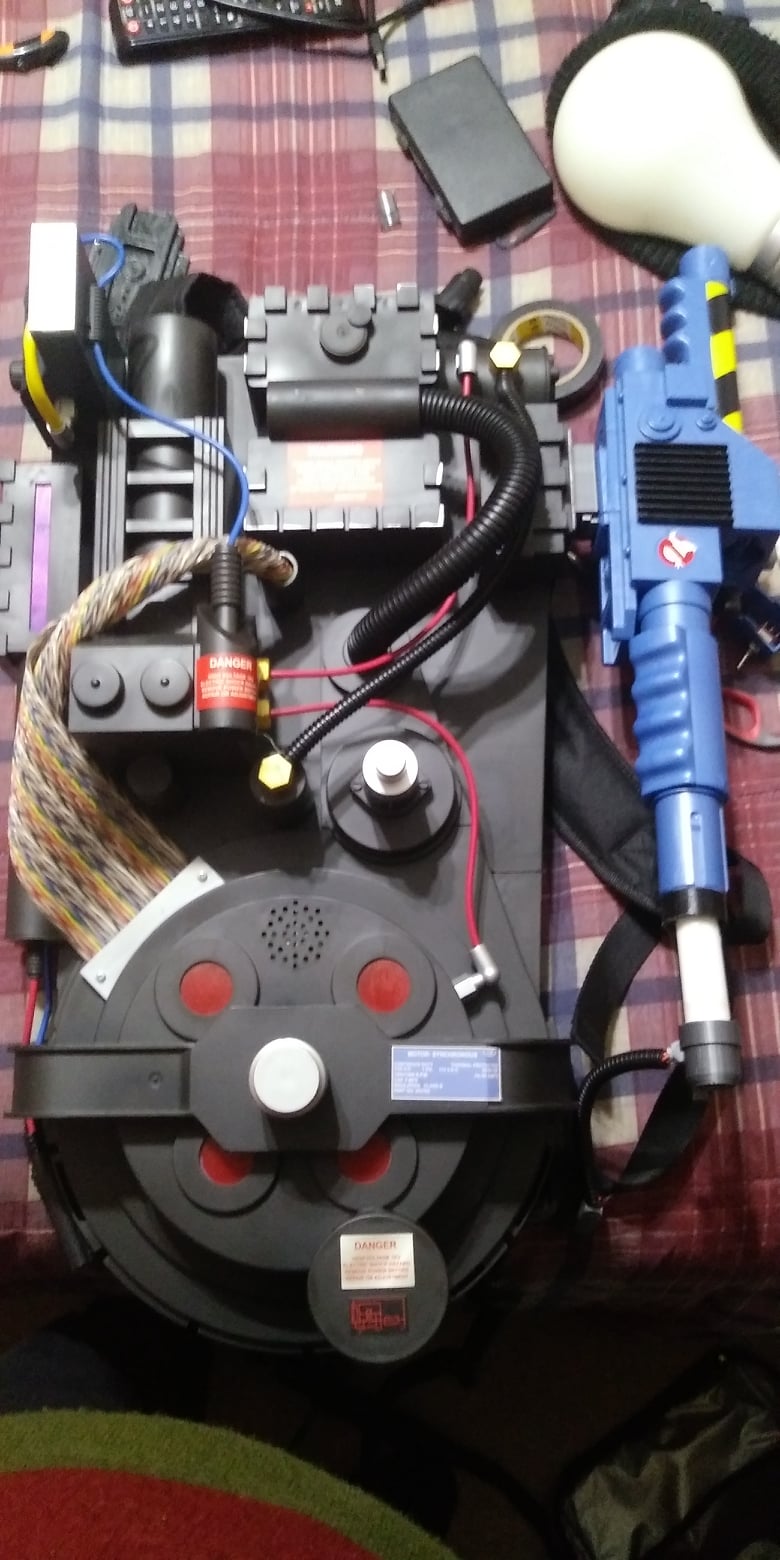 The 3D printed tip is from a 80% scale wand I bought last year. It did the job but there was an accident and.... Well you can guess what happened there. So I salvaged the Printed parts that I needed. I plan to make the wand and the Spirit pack as close as I can get to the Spengler wand and pack.
BoostedSTX liked this

By GBfan77 -  December 26th, 2021, 3:29 pm
-  December 26th, 2021, 3:29 pm#4964257
So I thought I'd replace the hand grip so that it resembled my Spengler wand. After checking Ebay and coming up with zilch I decided to try to make my own. Made a cardboard shape and glued layers of popsicle sticks to the desired thickness. Not ideal but it will have to do. It doesn't look like much but after sanding and staining it should be close enough for my needs. 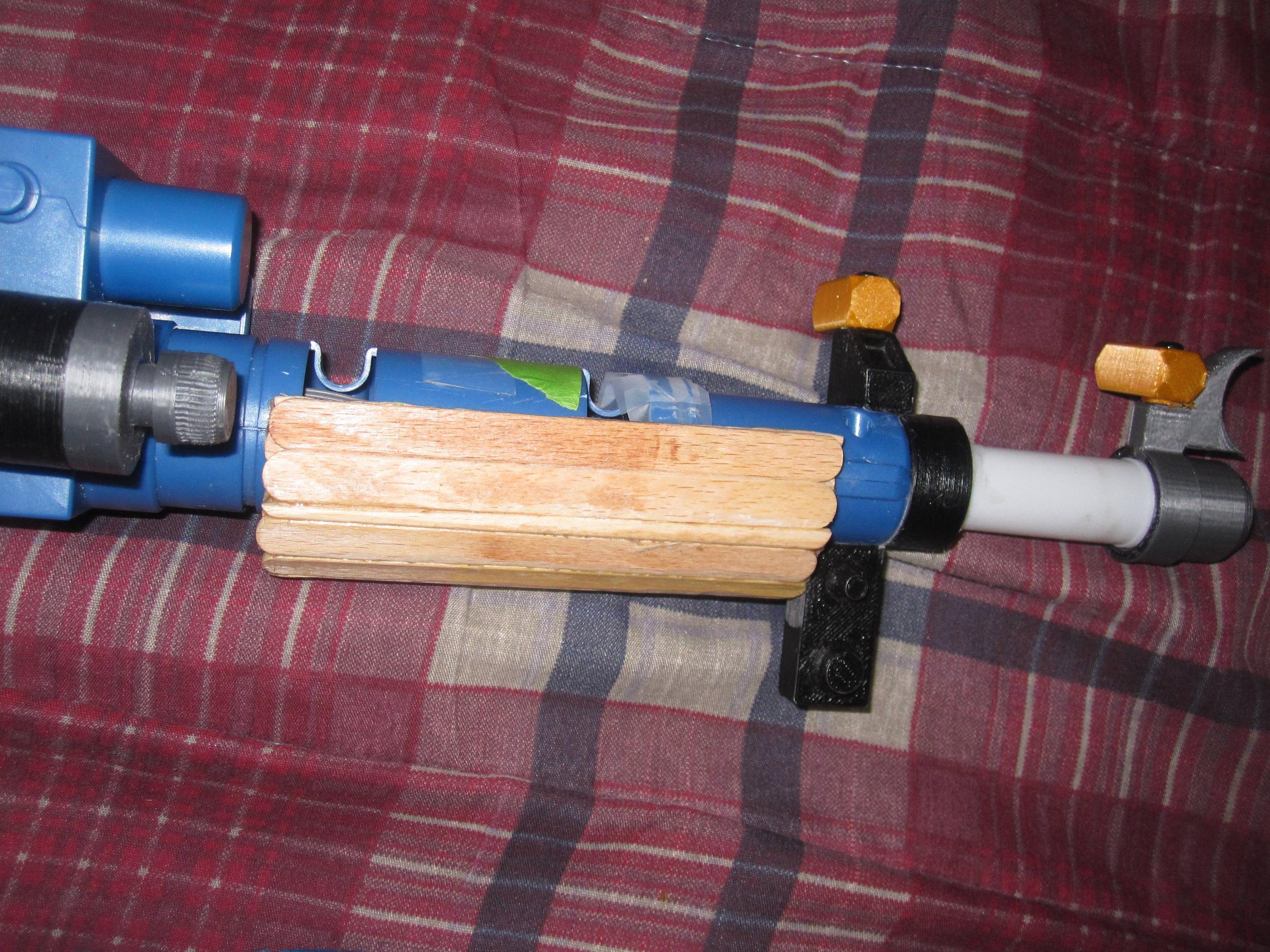 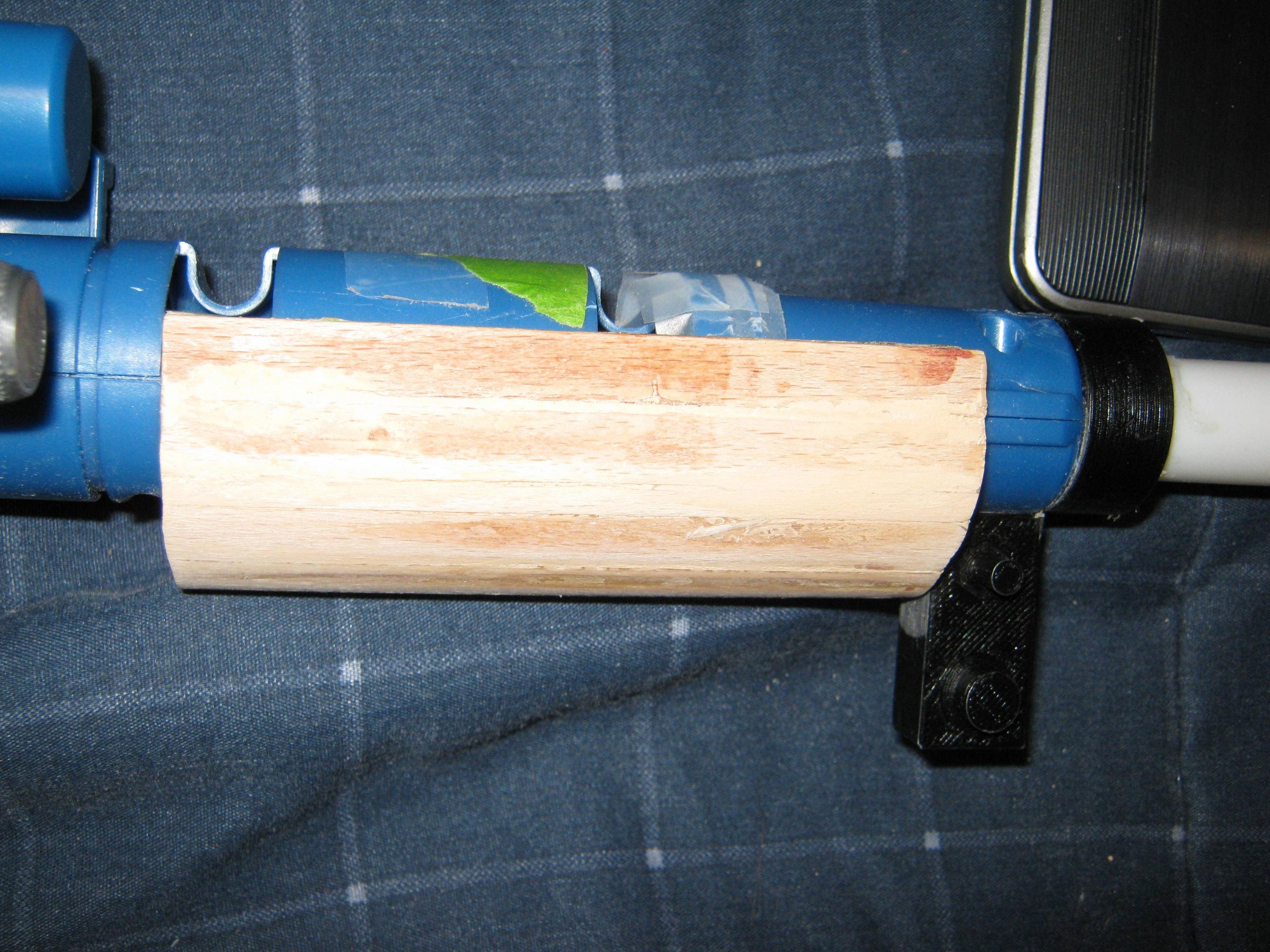 By GBfan77 -  December 29th, 2021, 4:19 pm
-  December 29th, 2021, 4:19 pm#4964451
While I await some 3D printed parts I thought I'd begin to Mod the Spirit pack so that it resembles the Spengler pack from the movie. Well I ordered a few items to make up the added cable that runs along the ribbon cable and when they arrived today I discovered, much to my chagrin, That it was the wrong thickness. Looked at it abit and decided "Screw it" and work with what I got. While I wish it was a bit bigger so it stood out more I guess it doesn't look that bad in this test fit. I'll leave it be for now until this spring when I can repaint the pack and add more details. 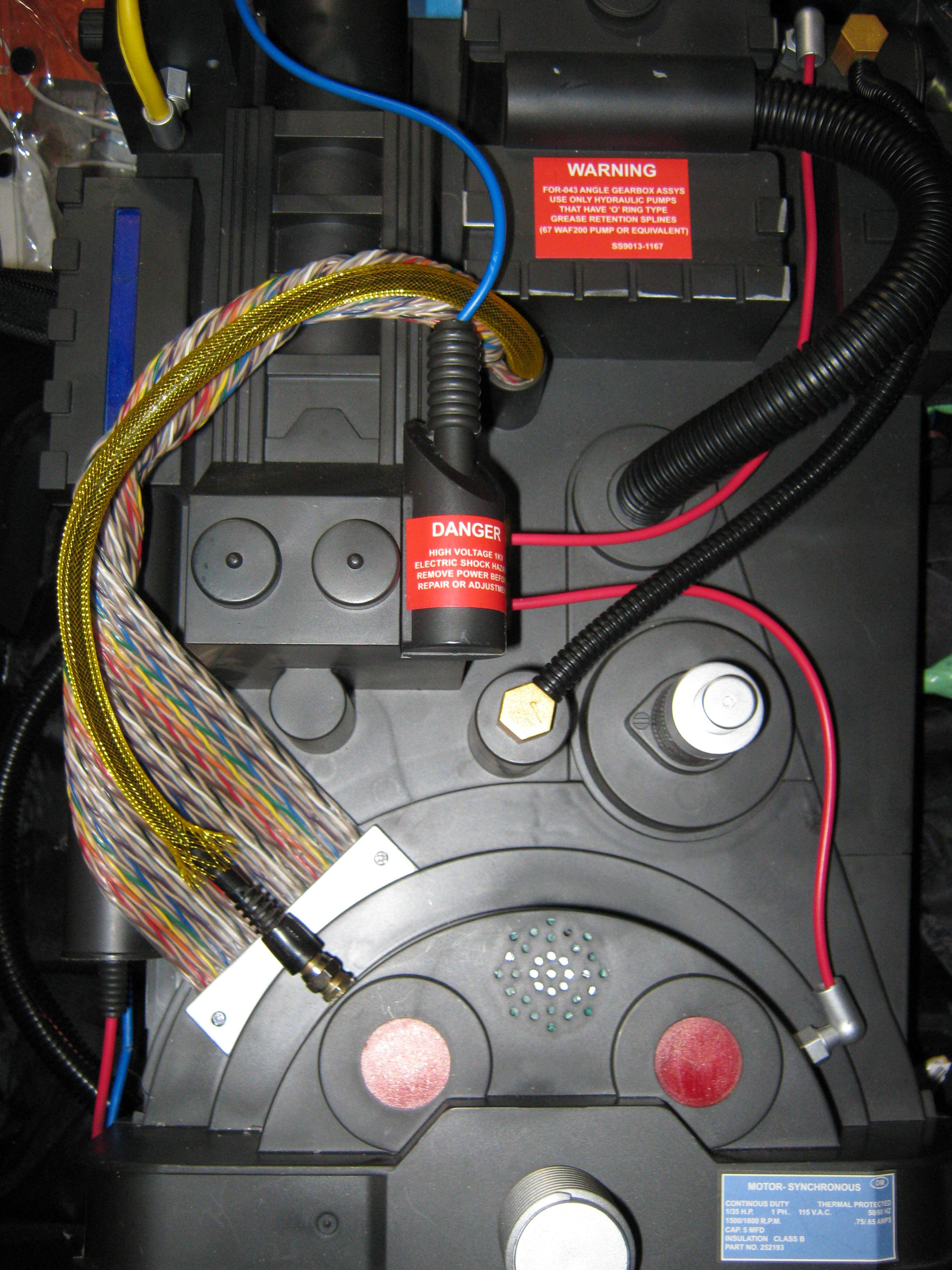 The screws are temporary.

The grip is a bit bulky due to the size of the Barrel and I suppose I could cut the Barrel off and replace it later but I don't want to make a weak point on the gun either. I can get my hand around it so that's all that matters. 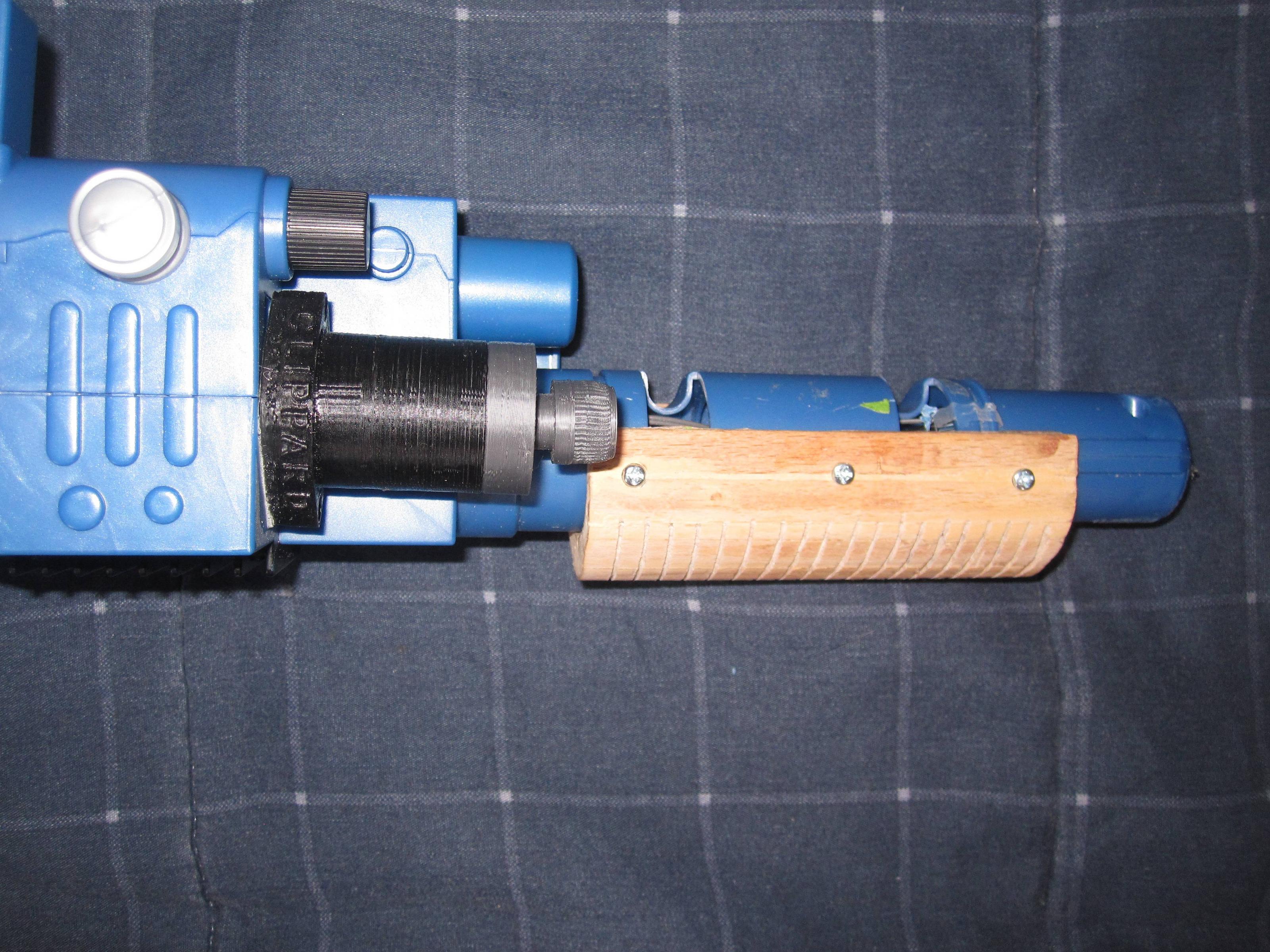 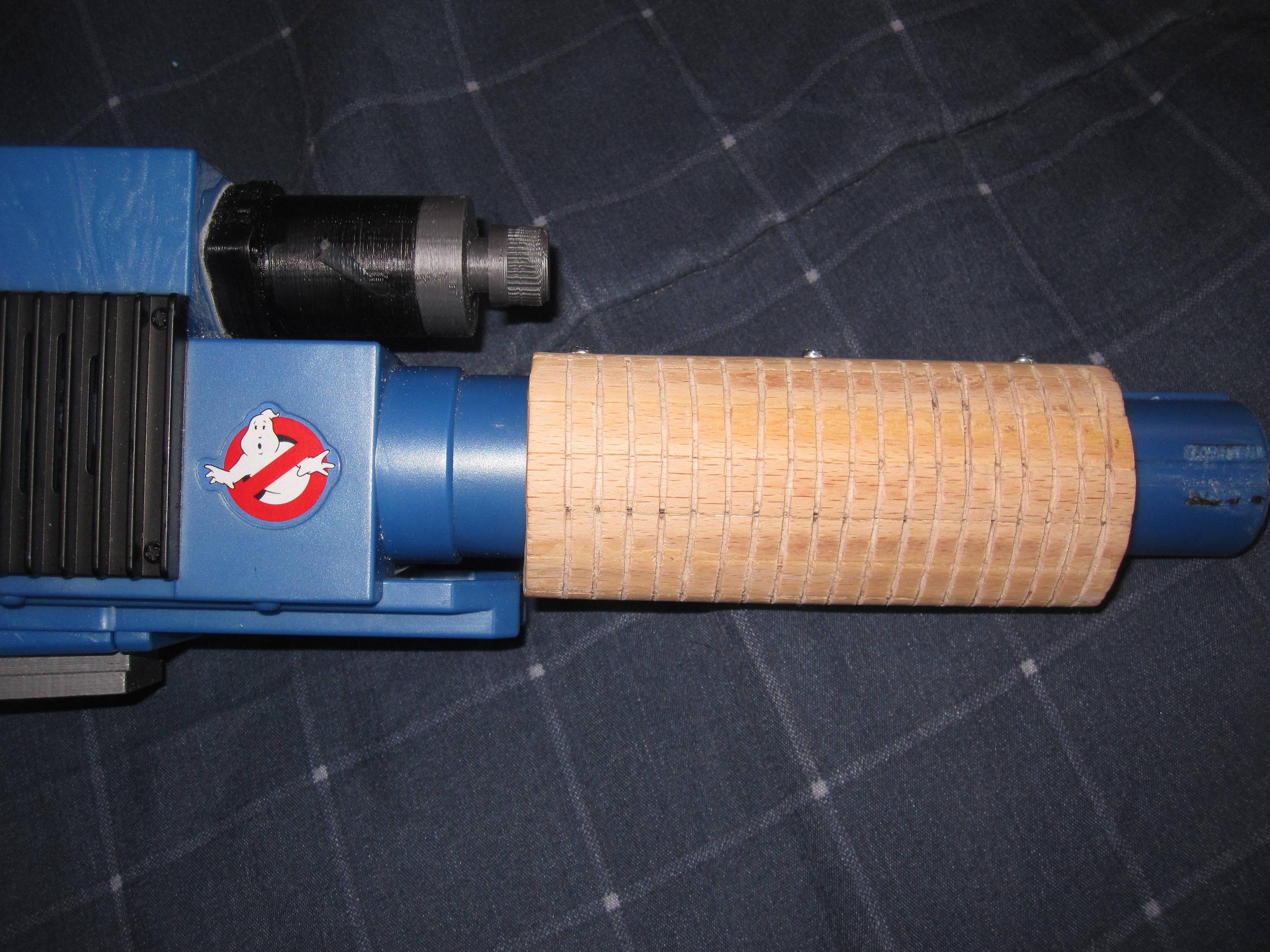 VenomSymbiote wrote: ↑January 10th, 2022, 9:14 am While scrolling down I thought the popsicle stick idea was going to turn out looking really off, but in the end it looks great! Good job!

It was something I put a lot of thought into and it was the only solution I could come up with that was relatively easy. If I can't find what I need I'll try to make it instead. So for the grip I used wood glue to glue the Popsicle sticks in layers until I had the desired shape and thickness and then sanded and putty filled where needed. It's not 100% screen accurate but neither is the Proton Blaster, and that's not my goal.

Some 3D parts came in. The gun tip and the heat sink from the afterlife Spengler pack. Why did I get that 3D printed and not just buy the real thing? Well since the movie came out the prices for the actual metal Heat sink has really gone up. It was cheaper to go with a 3D printed version that I can paint and make changes where I want. Not sure if the heat sink is to scale for the pack but it's the right size for the spirit pack. 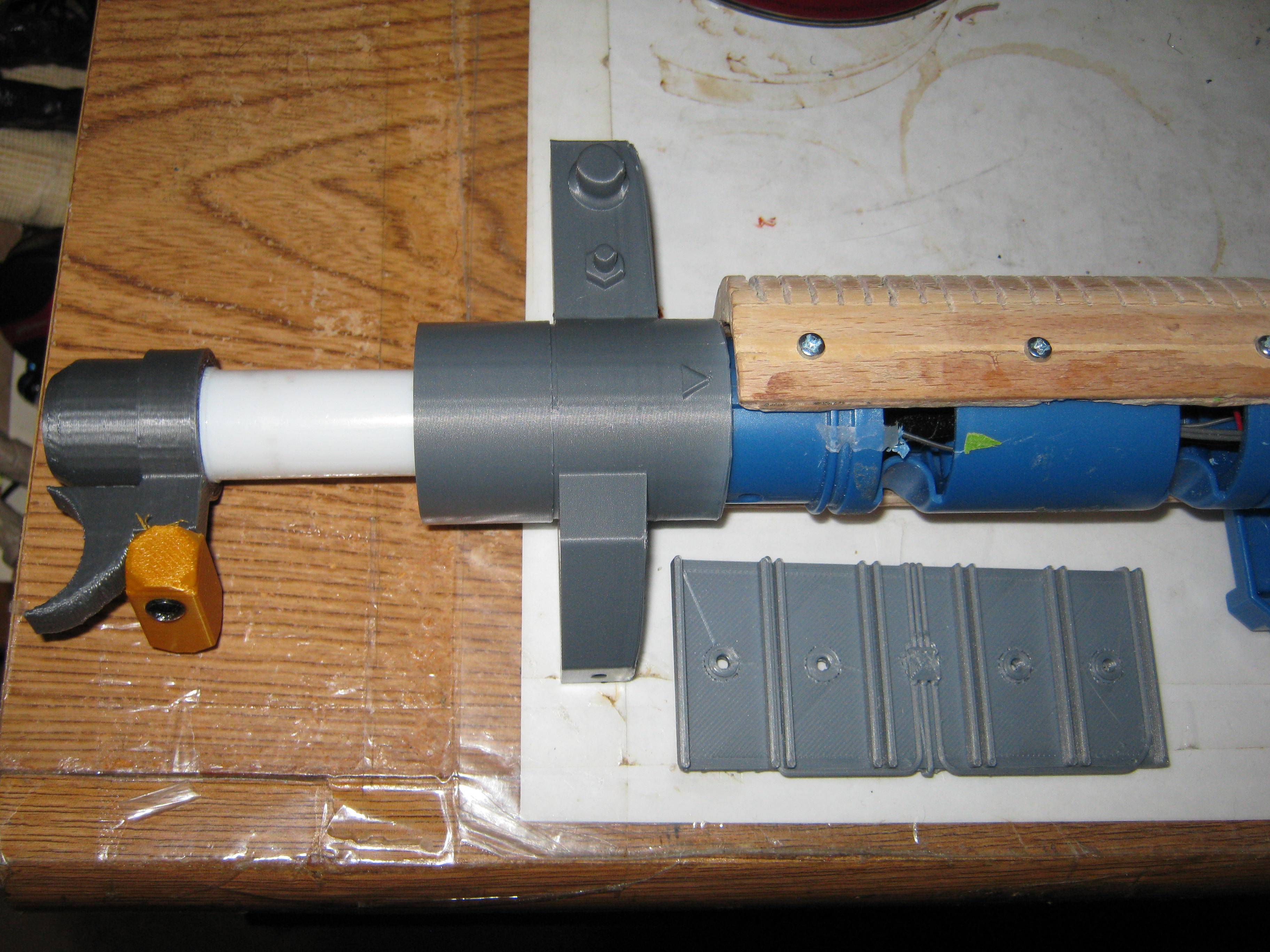 By GBfan77 -  January 10th, 2022, 3:19 pm
-  January 10th, 2022, 3:19 pm#4965089
While I was checking out reference photos of the Spengler pack I noticed an extra cable behind the ribbon that I hadn't noticed before. So I added it to my spirit pack as well as reworking the previous addition. I'm waiting on the correct size FLEXO PET Expandable Braided Sleeving to come in a few weeks. Also this is where I plan to install the 3D printed Heat Sink. 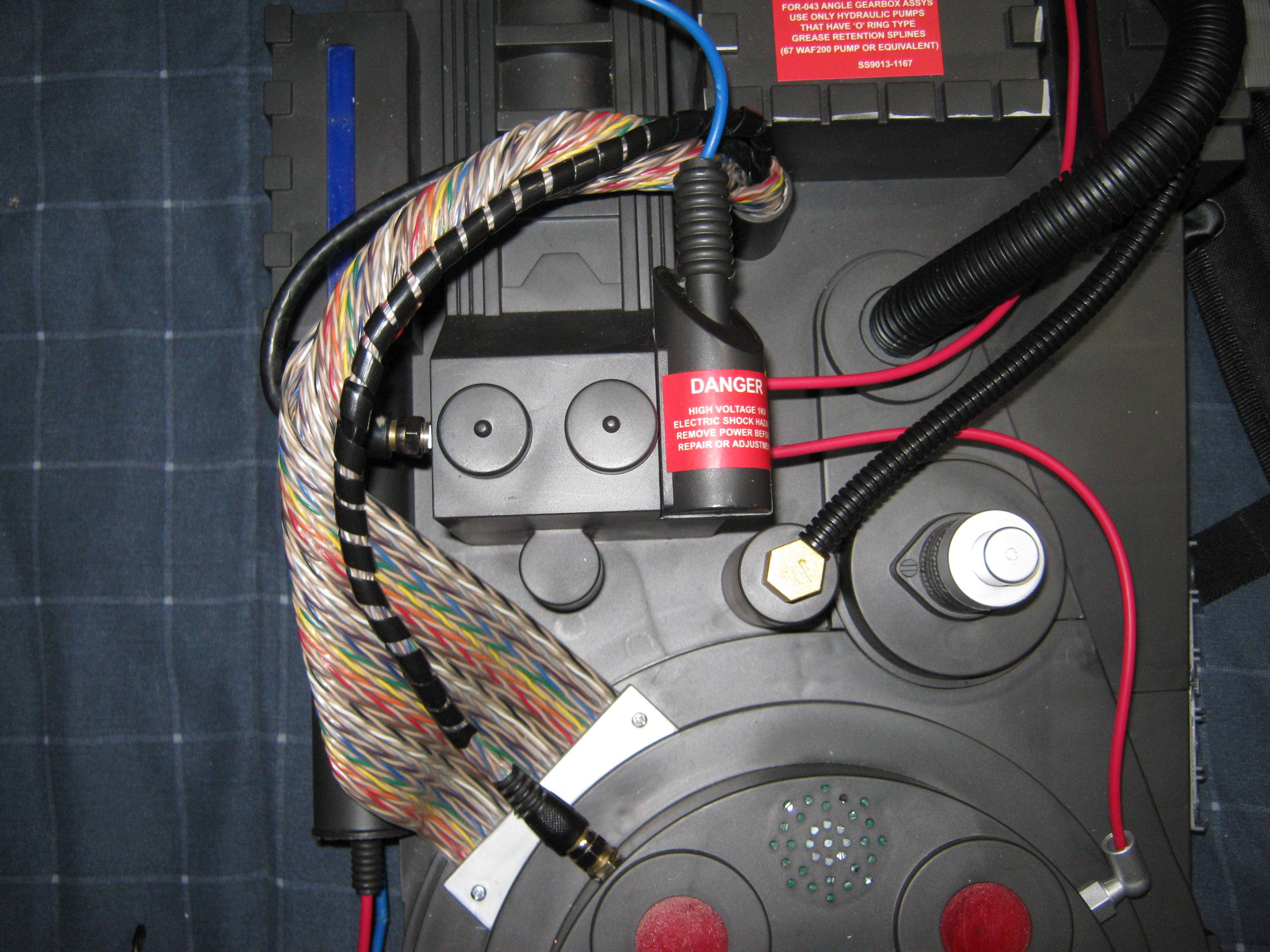 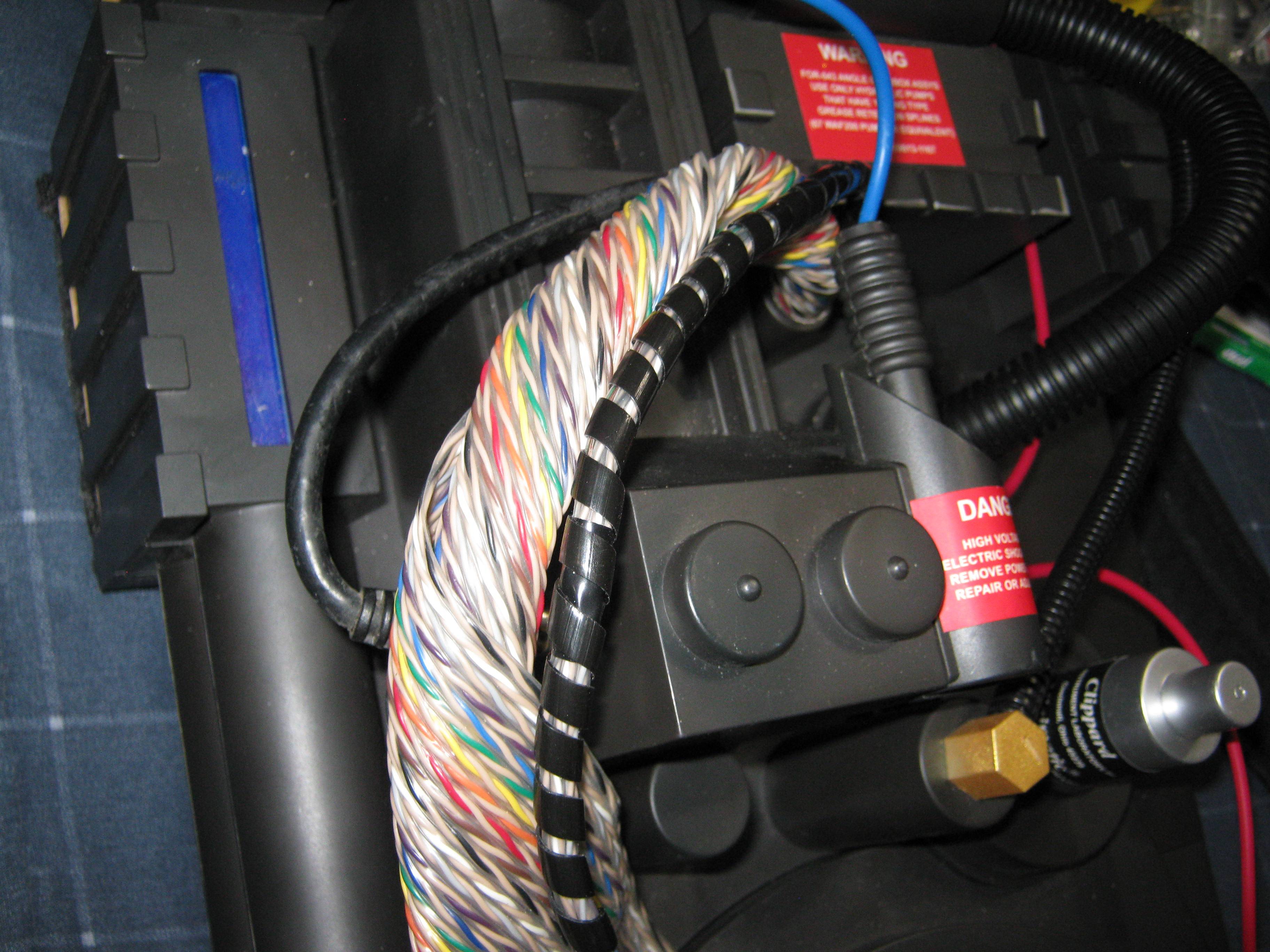 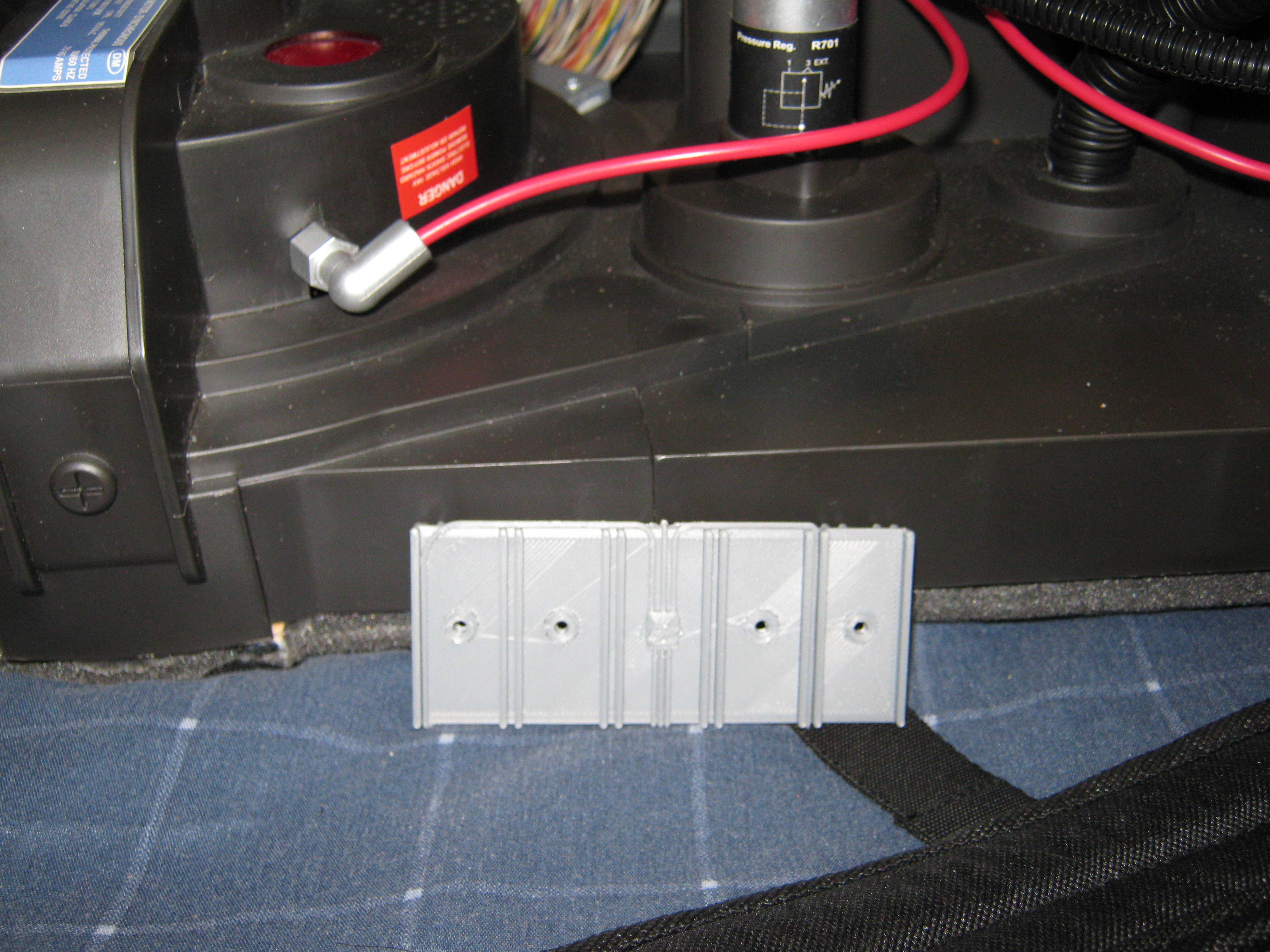 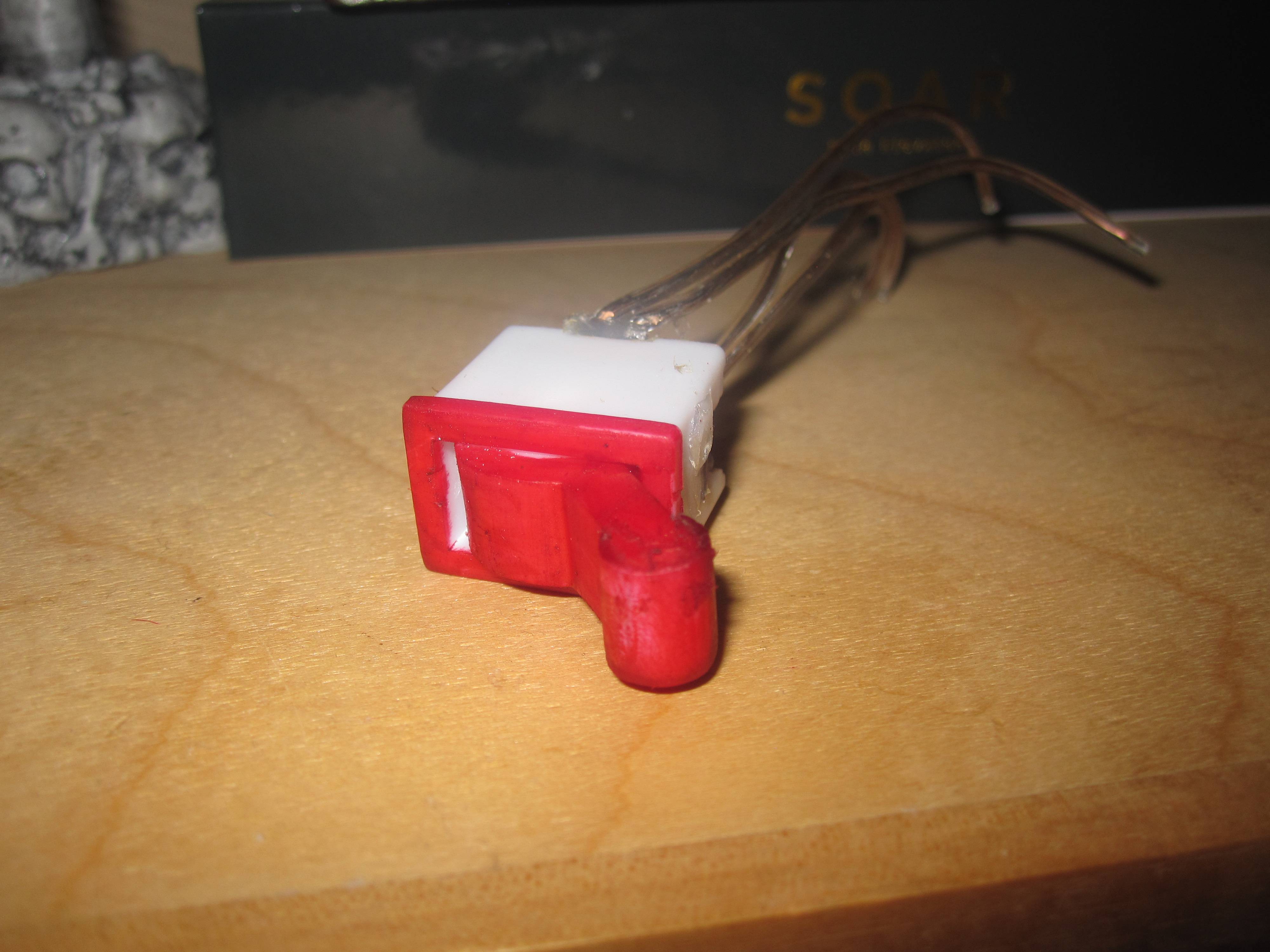 By GBfan77 -  January 17th, 2022, 3:27 pm
-  January 17th, 2022, 3:27 pm#4965522
Not much of an update here, The electronic kit for my project came in from Jupiter Electronics. The Bar graph for the thrower is slightly smaller than what should be for the Blaster MOD because it's meant for a Spirit thrower which is much smaller. However I'm thinking about how much space I have to work with inside the Blaster and I don't want to cut away too much of the internal structure. if I don't have to.

Also there seems to be an issue uploading images, I will try again later.

The Lighting sequence is installed. Temporary as I still need to paint the gun. Had to cut away a few things to make room and had to leave out the wimpy speaker that came with the blaster. That's fine because I plan to replace it with something that has better sound.

Looks a little rough, I know, still need to sand a few spots here and there. 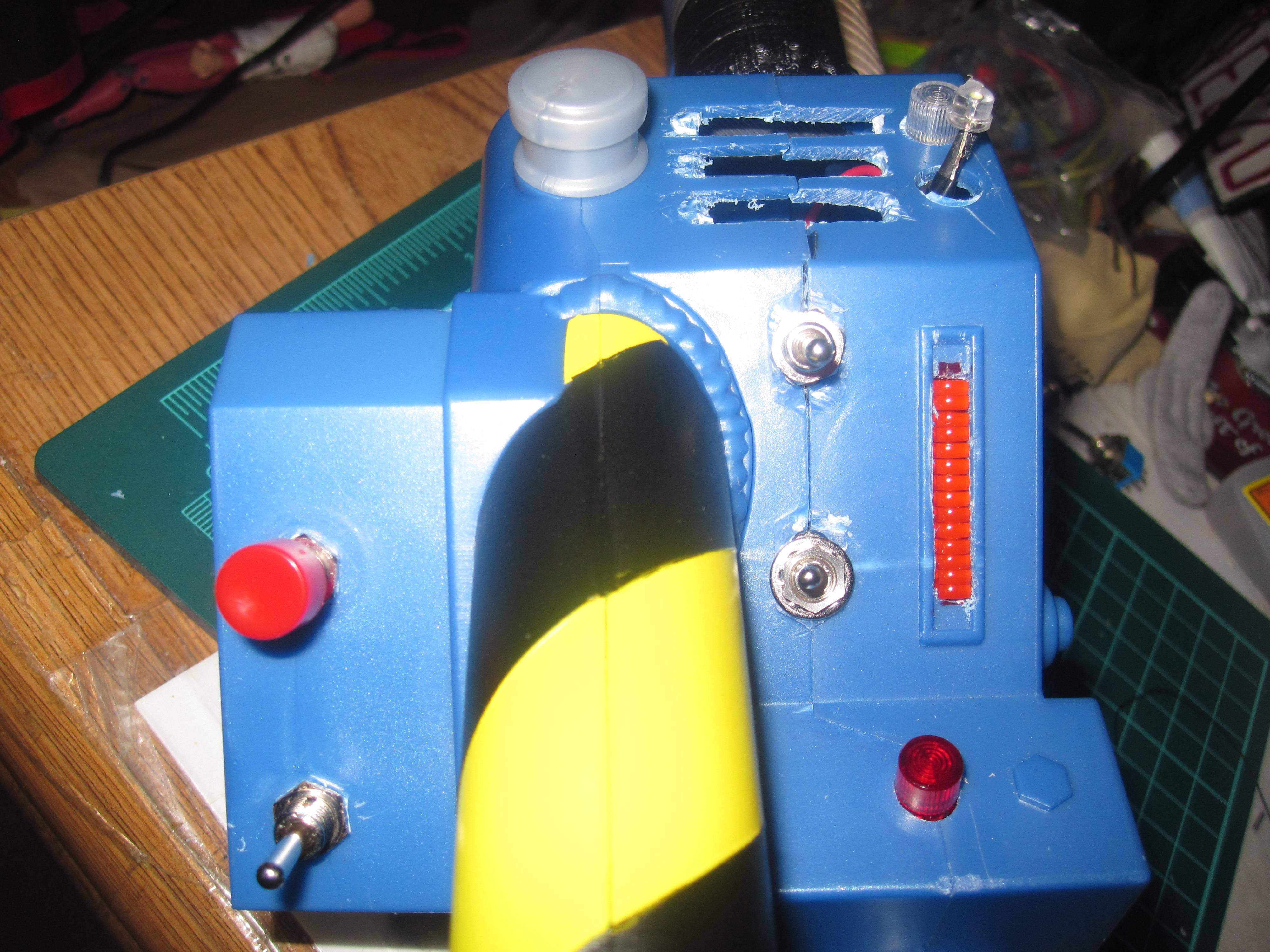 Did you design the switch yourself or did you find plans online to print one?

BoostedSTX wrote: ↑January 21st, 2022, 5:54 am Did you design the switch yourself or did you find plans online to print one?

I made the switch myself. I took a Dollar Store flick switch light and removed the switch part. It's just a Panel Slide slide switch in a housing that makes it look like a wall switch. Because I wanted to operate two circuits with the same switch I replace the slid switch with a 6 Pin 3 Position DPDT Panel Slide Switch. It was slightly bigger than the original so I had to mod the housing so it would fit.

So I made my own. A crinkly hose covered in a cloth glued in place.

Does it look screen accurate? No, it's the wrong color as well. But it does the job and unless you are a serious prop builder I don't think anyone will notice. Beside, if I happen to come across the right color of cloth I can always make another one. 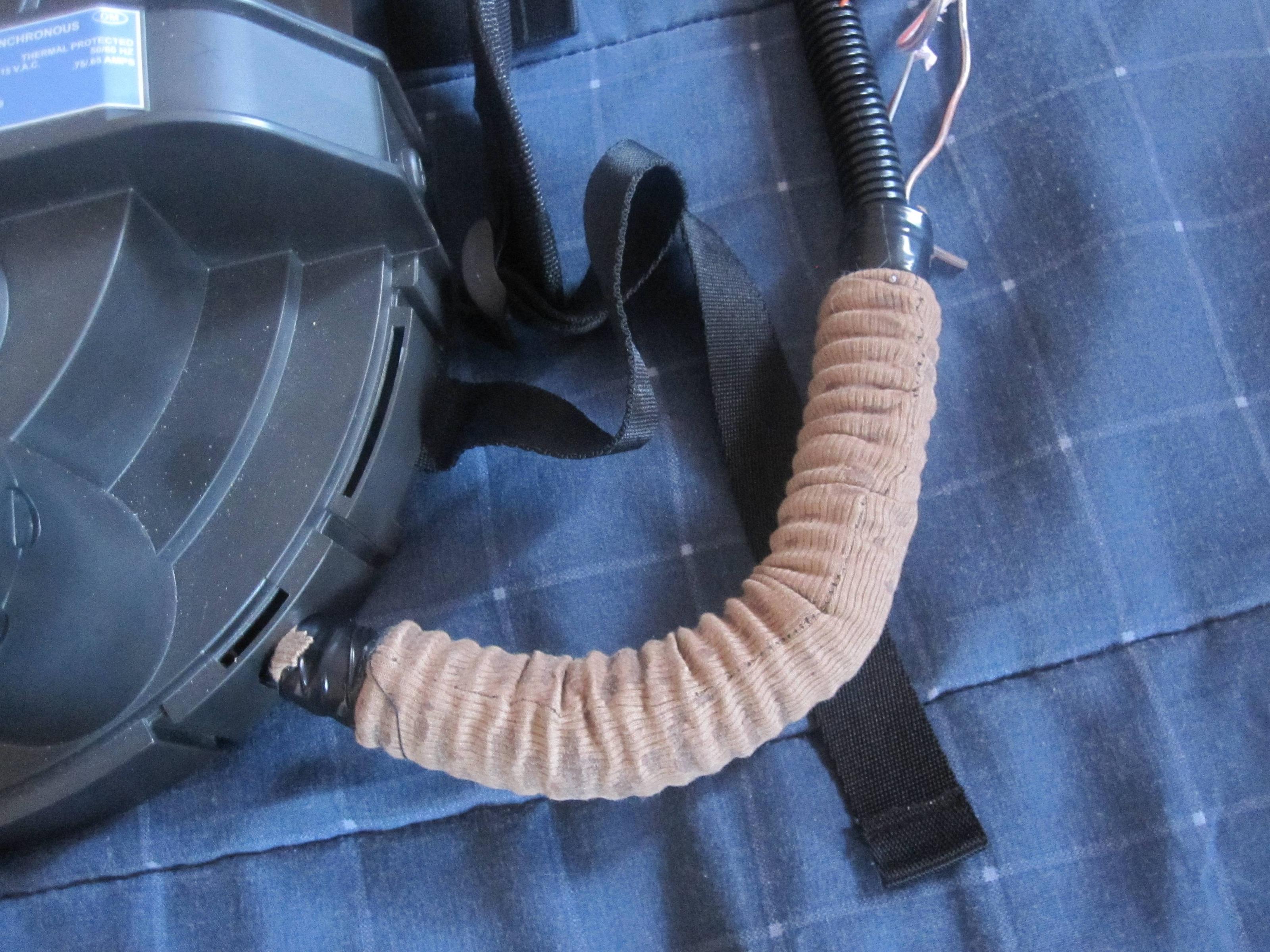 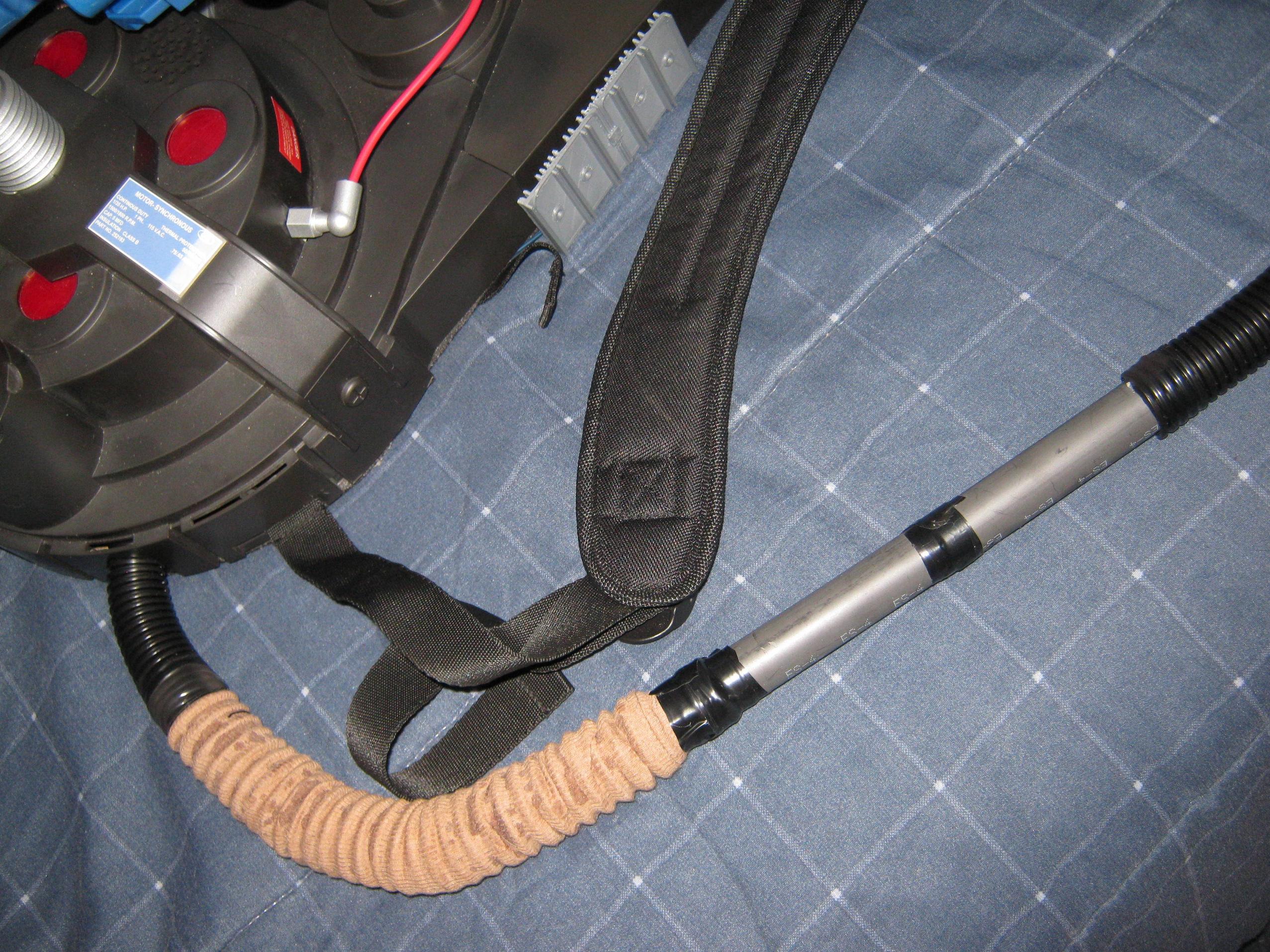 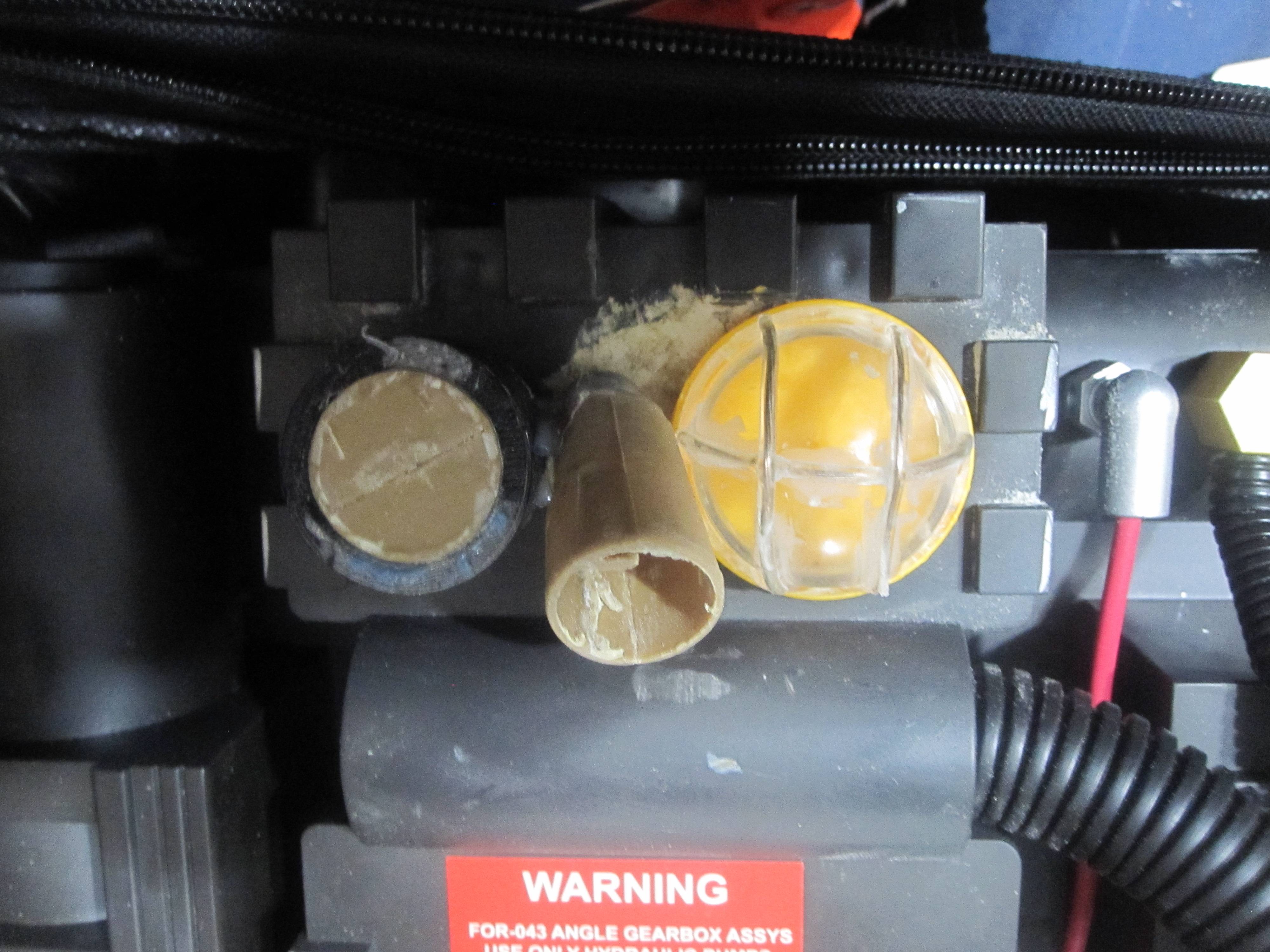 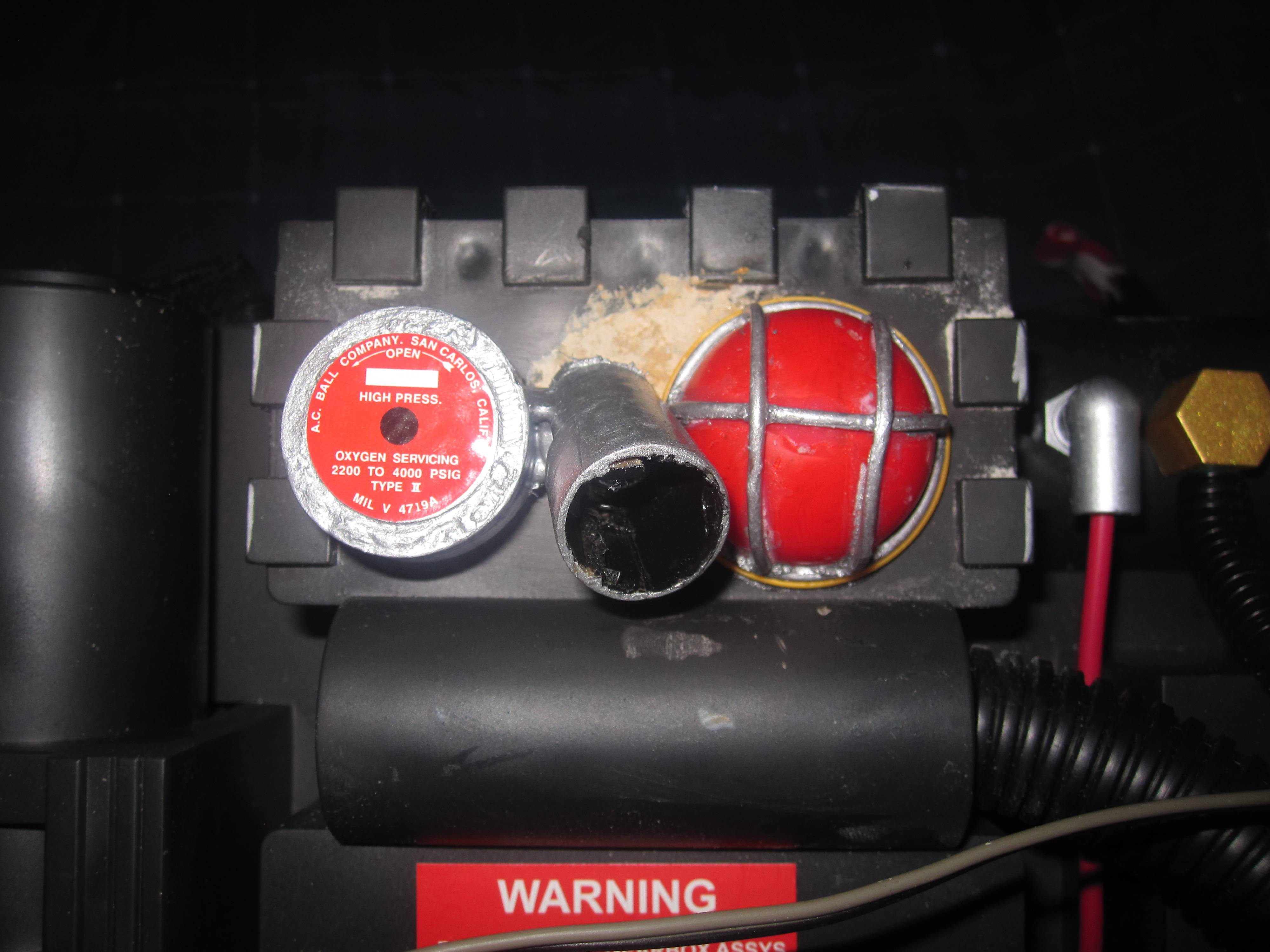 I plan to use a Mat Black or satin. Not sure if its screen accurate but its my go to color. I usually use Krylon Fusion because that stuff is suppose to bond to the plastic and doesn't wear off easily. 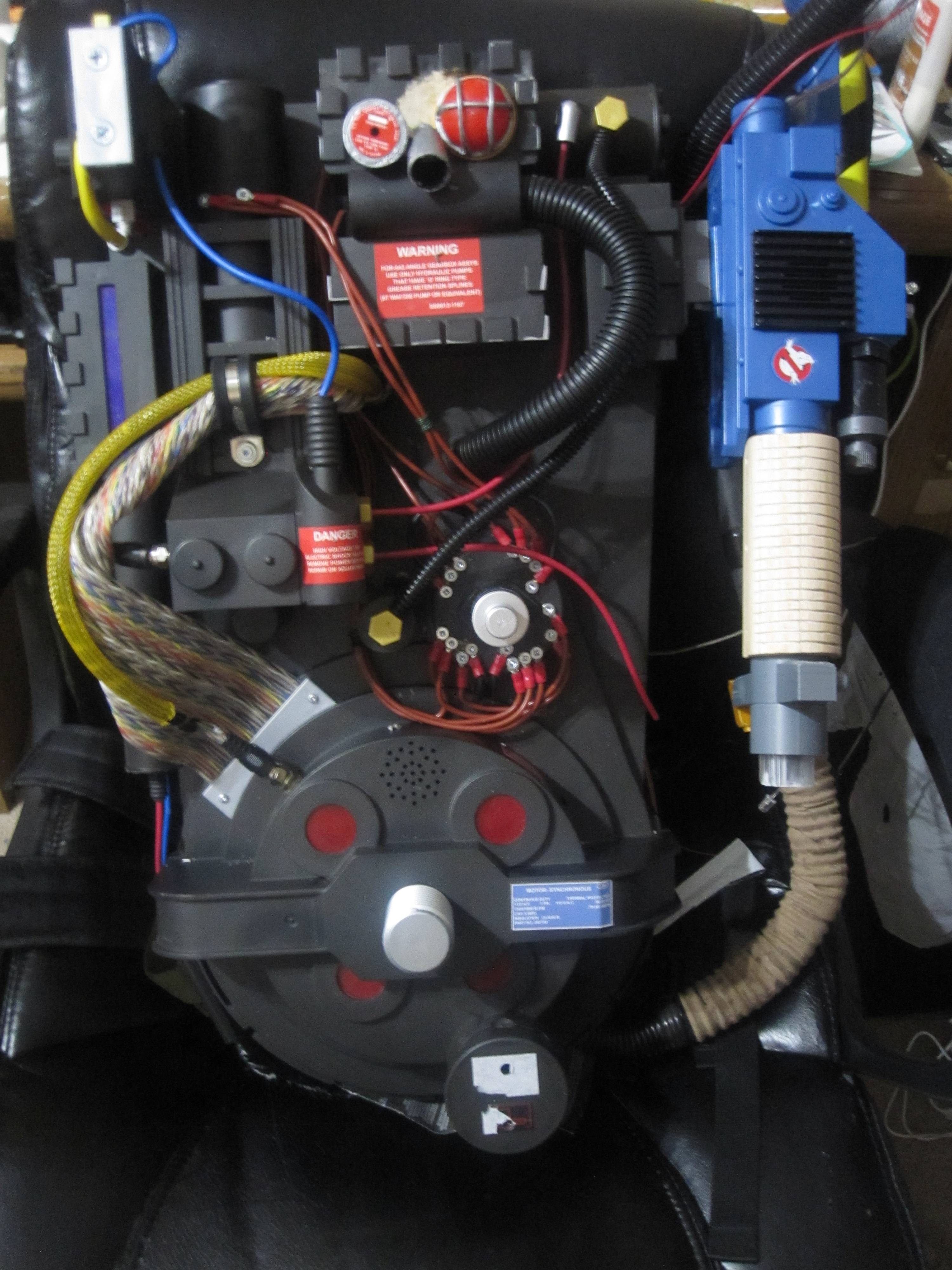 By VenomSymbiote -  February 11th, 2022, 12:04 am
-  February 11th, 2022, 12:04 am#4967053
Lookin great. I don't know if it'll bother you but for me the GB sticker location sticks out. I haven't painted mine yet but from videos I've seen of people who have painted it up the logo indent is a bit jarring. I took a thin piece of plastic (from an action figure box) and cut it the exact size of that rectangular section right near the heat sink and glued it in place. A simple sort of solution if the indent of the sticker would have bugged you as much as it would me.

VenomSymbiote wrote: ↑February 11th, 2022, 12:04 am Lookin great. I don't know if it'll bother you but for me the GB sticker location sticks out. I haven't painted mine yet but from videos I've seen of people who have painted it up the logo indent is a bit jarring. I took a thin piece of plastic (from an action figure box) and cut it the exact size of that rectangular section right near the heat sink and glued it in place. A simple sort of solution if the indent of the sticker would have bugged you as much as it would me.

I plan to fill it in with some filler but your method might be easier. I have to the spring to figure it out. Meantime I just need some clamps to finish this stage of the project. 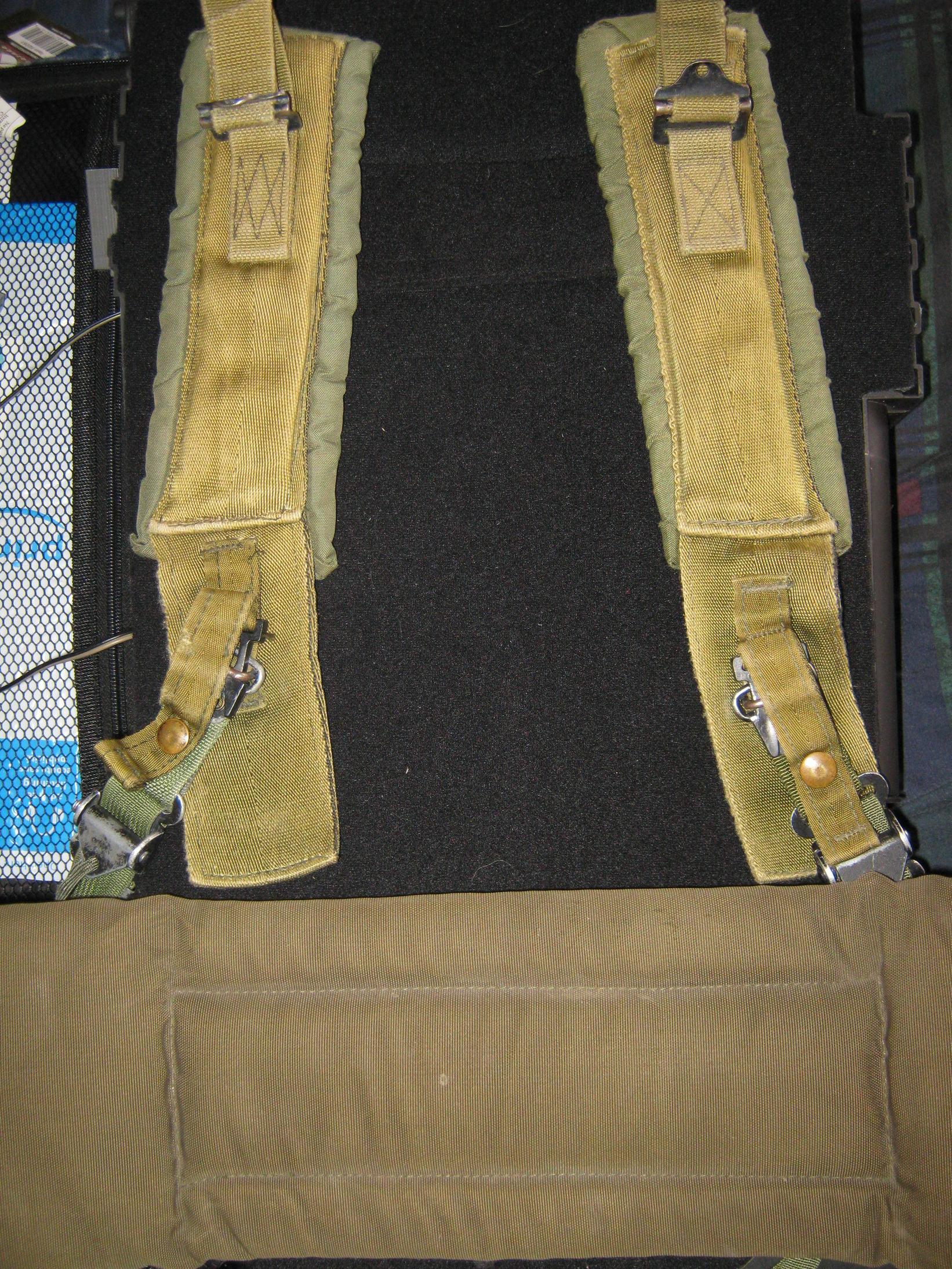 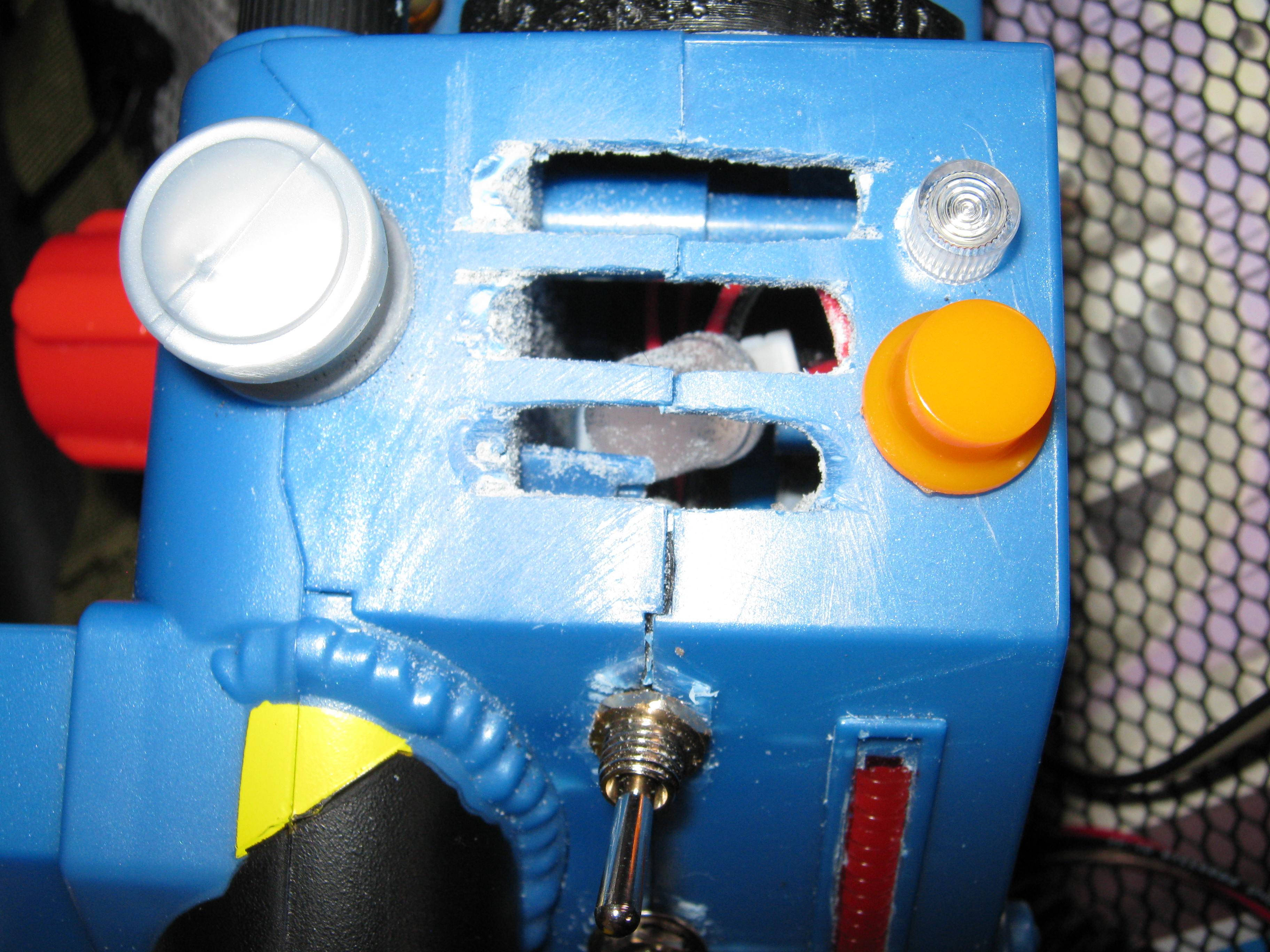 By GBfan77 -  February 12th, 2022, 7:34 am
-  February 12th, 2022, 7:34 am#4967107
Little something I decided to do. I want to fill in the speaker holes on the cyclotron, but that means redirecting the speaker sound as I'm using the stock sound effects as the power up and the Blaster MOD for the rest. I decided to drill out holes in the N filter to mount a speaker there. It looks rough, but I plan to file the holes and cover them with a mesh. If You are going to do this, use a drill. It can be done with a sharp knife in theory but I've had my experiences with sharp knives and nicked arteries so I do not recommend you do it this way.

The Speaker for the MOD Blaster will be mounted in the Booster tube. 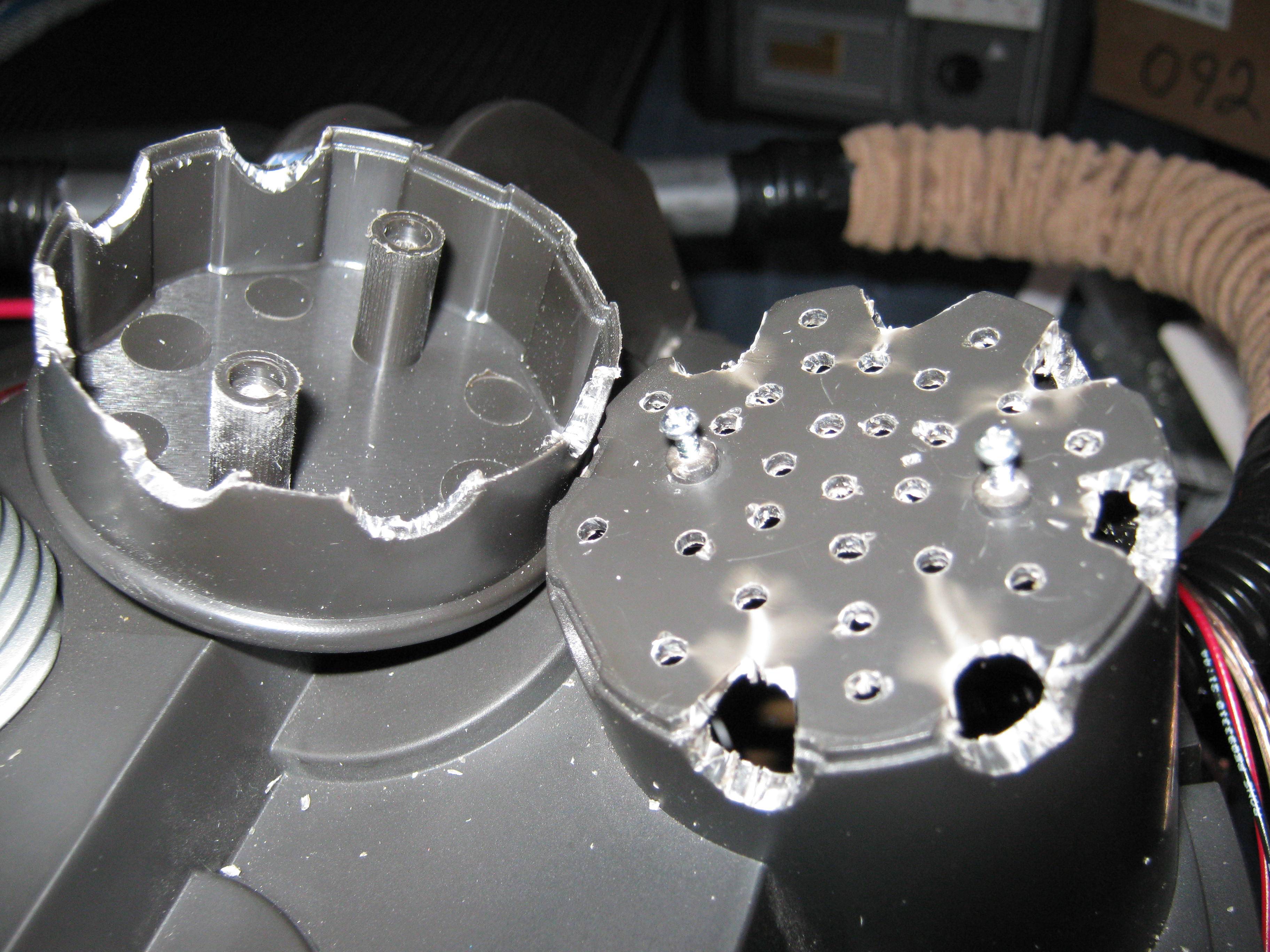 I believe it's around seven months right now, but […]

Suite and belt all complete. I Need to find an ho[…]

To be quite honest, I have zero idea how to unders[…]